This Winter, residents of the Goulburn Valley may, once again, look at the prospects for another trip up north, this time conscious of the fact that tropical cyclone Debbie did more harm to tourism than simply destroy major tourist buildings and infrastructure.

Locals should remember that the slow-moving tropical cyclone inflicted severe damage on long stretches of the Great Barrier Reef, and, because of the altered environment in which the fish of the reef live, is now likely to present a threat to the health and safety of tourists over the next few years.

Victorians holidaying in the north are often keen fishermen and women and enjoy a variety of tropical fish species, but must now consider the effects of Debbie on the fish they might usually eat.

Reef fish are usually part of a food chain starting with marine plankton, called dinoflagellates, which live on coral beds and sometimes in freshwater habitats. There are about 2000 species of these very small creatures, which sometimes reproduce in their billions produced a pink algal bloom, sometimes seen in local rivers and lakes. 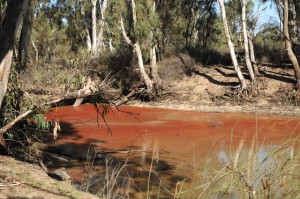 On the reef, these small creatures provide food for small fish, shellfish and krill, which in turn become food for certain larger species – in particular, barracuda, red bass, red snapper and moray eels. Most important are the toxins produced by these marine algae and which remain attached to algae, coral rubble and seagrass. They have no effect on their predators, but are disrupted from their habitat and enter the food chain especially after storms. One species of dinoflagellate – the genus Gambierdiscus – is found in warmer waters and as far south as Merimbula.

About one hundred species of fish and other marine animals are known to accumulate toxins, which build up through this food chain, and affect the whole ecosystem. Cyclone Debbie has disrupted the habitat of dinoflagellates and the fish feeding on them. Consequently, many fish might carry the toxins responsible for ciguatera and tetrodotoxin poisoning.  This is a very rare world-wide issue, but more common in South Pacific waters.

Ciguatera fish poisoning (CFP) is known to affect people throughout the world and especially the South Pacific. 1400 documented cases occurred in Australia between 1965 and 2010, with two fatalities.

The diagnosis is usually made based on clinical symptoms and history of recent fish ingestion. Unfortunately for humans, ciguatera toxin is tasteless, odourless, and temperature stable. Cooking, freezing, salting, drying, smoking, or marinating fish will not eliminate it. Symptoms of CFP vary according to the amount of toxin and its composition, usually affecting the gut and sometimes the cardiovascular system. Rarely, neurological symptoms (paraesthesia, cold allodynia) occur. Joint and muscle pains are common and, rarely, patients may die from respiratory failure. Persistence or recurrence of neurologic symptoms are the hallmarks of CFP. 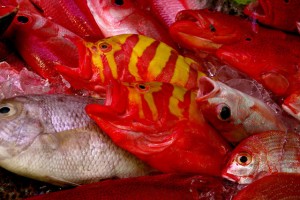 If exposed patients are further exposed to affected fish, their symptoms are likely to be more severe than those experienced with their initial episodes of CFP.

Underreporting of outbreaks of ciguatera poisoning and insufficient public education make it difficult for the traveller to know when local fish are contaminated. However, in endemic areas several precautions may reduce but not eliminate the risk.

Travellers may be advised as follows:

There are currently no regulatory limits in Australia for ciguatoxin in seafood.

Tetrodotoxin (TTX) poisoning results from the consumption of certain fish (pufferfish, ocean sunfish, blue-ringed octopus, etc) containing the poison. The poison prevents the carriage of stimuli in the nervous system and is considered “more poisonous than cyanide”.  Affected patients may experience paralysis of the diaphragm, respiratory failure and death.

The poisonous nature of puffer fish has been known for centuries and in Japan, the flesh (ie fugu) is considered a delicacy. It is prepared by chefs specially trained and certified by the government to prepare the flesh – free of the toxic liver, gonads, and skin. Despite these precautions, up to 50 deaths from tetrodotoxin poisoning are reported each year in patients ingesting fugu.