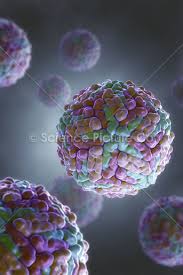 Dengue fever, also known as ‘break bone fever’, results from infection by one of four types (and many strains) of virus from within the flavivirus genus. The four dengue viruses, DEN-1, DEN-2, DEN-3 and DEN-4, are found in most tropical and subtropical regions of the world, and are transmitted by certain Aedes sp (A.aegypti and A.albopictus) mosquitoes. Dengue virus is a member of the Flaviviridae family, which also includes yellow fever virus, Japanese encephalitis virus, West Nile virus, and Zika virus. Infection with 1 serotype confers protective immunity against that virus for life but does not lead to protection against subsequent infection with the other serotypes.
Dengue affects 40% of the world’s population, infecting some 390 million people each year.

Evolution
All 4 serotypes of endemic DENV have evolved independently from ancestral sylvatic viruses and have become both ecologically and evolutionarily distinct. In the 1950’s dengue, a previously benign disease, developed a mysterious new fatal form (dengue hemorrhagic fever) which is expanding its global terrain.
In their history, dengue and yellow fever seem to display a tendency toward mutual exclusiveness, consistent with the geographical and experimental evidence.
The Aedes aegypti mosquito is endemic in North Queensland. Bites occur during daylight hours.

Transmission
Aedes sp. mosquitoes are daytime feeders (before dawn and mid-late afternoon), except in overcast weather when it becomes an all day activity. Mosquito larvae are usually found in human-made containers especially in populated areas and travellers are at highest risk in residential areas.

The incubation period is usually 5 to 8 days. 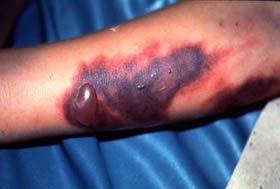 Features
Many cases are subclinical, but others experience a sudden high fever, headache, weakness, muscle pain, sacral pain and sometimes a rash resembling scarlet fever. The disease is usually self-limiting after about 6 days, producing a degree of immunity to the strain of virus involved.

Complications
Secondary infection with another strain may, in rare instances, cause serious complications such as dengue haemorrhagic fever (DHF) or dengue shock syndrome (DSS), which may be fatal.
In Victoria, dengue fever is a Group B notifiable disease and must be reported within 5 days.

Dengue in pregnancy
The effects of dengue in pregnancy have been unclear in the past, but a recent literature review concluded:
Symptomatic dengue infections in pregnancy may be associated with adverse fetal outcomes, most commonly preterm birth and low birth weight but also miscarriage and stillbirth.
Severe dengue infections may be associated with stillbirth.
Pregnant travellers should be advised of possible fetal risk, but with current evidence there is no case for advising against travel to dengue endemic areas.

Distribution
Due to the broad distribution of dengue’s mosquito vectors, dengue infections are widespread in most tropical and subtropical countries of the South Pacific, Asia, the Caribbean, the Americas, and the Indian Ocean islands.  In recent years, dengue has also emerged in Africa and has become significantly more common in Kenya, Tanzania, Angola, and several countries in West Africa.
Australia
A Torres Strait Island woman died of DSS early in 2004. This was the first dengue-related death in Queensland since 1905. While DHF is a serious disease, it is more serious for children than for adults.
Extensive outbreaks of dengue have occurred in North Queensland in 1992-93 and in 2003-04. Lesser outbreaks occurred in 2005, 2006 and 2008.
In early 2009, all four strains of dengue were discovered in North Queensland. 798 cases (types 2 and 3) were reported from Cairns and 72 (types 1 and 3) from Townsville. 12 cases of type 4 were reported from Innisfail.
In 2014, a four-year program – Eliminate Dengue – was introduced in Townsville, in which a naturally occurring bacteria Wolbachia was used to infect local Aedes aegypti mosquitoes.This interfered with the mosquitoes’ ability to transmit dengue and, with local inbreeding over a four year period, reduced reported cases to zero. 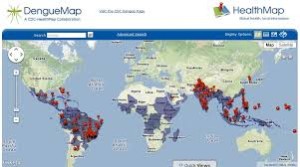 From Communicable Diseases Intelligence
According to predictions made using the CSIRO climate matching software CLIMEX, ® Ae. albopictus could become established elsewhere in Australia, including southern Australia, and lead to these areas becoming receptive to dengue infections—a condition that currently does not exist because the vector Aedes aegypti is confined to Queensland and no species in southern Australia is known to be capable of transmitting dengue.

From ProMED
The US Centers for Disease Control and Prevention has billed dengue as the most important mosquito-borne viral disease affecting humans — ahead of malaria and encephalitis — with an estimated 2.5 billion people at risk worldwide.
All over Asia, governments are scrambling to halt the spread of the disease, with the agenda topped by efforts to educate the public on the disease and control of mosquito-breeding areas, as there is no known cure for dengue.

Vaccine Information  (from Travax)
No dengue vaccine is available or approved for travellers living in non-endemic areas who will be visiting or living in endemic areas.

A tetravalent dengue vaccine (Dengvaxia; Sanofi Pasteur) has been approved in the US for use in persons aged 9-16 years who have laboratory confirmation of a previous dengue virus infection and live in a dengue-endemic US territory (American Samoa, Guam, Puerto Rico, and U.S. Virgin Islands). Vaccine effectiveness against symptomatic infection in this group is approximately 76%.
Dengvaxia is also approved in approximately 20 dengue-endemic countries (including Brazil, Costa Rica, El Salvador, Guatemala, Indonesia, Mexico, Paraguay, Peru, Singapore, and Thailand) for use in persons aged 9-45 years living in these areas. In Australia, Dengvaxia is available by special release for use in persons aged 9-45 years living in endemic areas.
Two promising vaccine candidates from other manufacturers, which may offer protection against dengue for different populations (including travellers) and have no toxicity, are still in Phase 3 trials.

Prevention
The normal precautions such as use of tropical strength insect repellents (containing DEET or Picaradin) and the wearing of long sleeves and long trousers if you are outside during the day or in the evening, are recommended. General avoidance of mosquitoes bites is suggested.

International
Travellers are advised to practice daytime insect precautions in affected regions.
Pregnant travellers should be advised of the possibility of adverse effects of dengue on pregnancy, especially late pregnancy, and advised to be meticulous in taking anti-mosquito measures, especially during daylight hours.