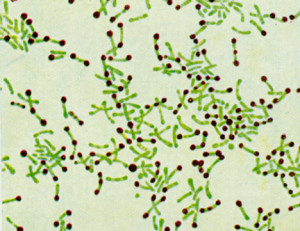 The Disease
Diphtheria is caused by an exotoxin produced by the Gram-positive bacillus Corynebacterium diphtheriae.
Incubation
2-5 days, sometimes longer.
Transmission
Spread is by nasal droplet from person to person. Humans are the usual reservoir and carriers are usually asymptomatic. Spread may occur for up to four weeks, unless antibiotics are used.
Features
The infection causes a severe sore throat with swollen glands. 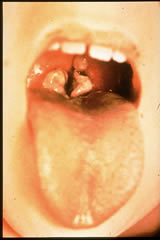 A characteristic exudate forms a greyish-green membrane in the pharynx and can cause severe respiratory obstruction.
Infectivity
The patient is infectious for several weeks and about 1 in 15 patients will die. See Caddie (the 1976 movie starring Helen Morse and Jackie Weaver).

Incidence
At the height of the 1921 epidemic, there were 23,199 notifications (annual notification rate 426 per 100,000 population) in Australia. The last reported case in Victoria occurred in 1991 and in Australia in 1992.
A skin lesion caused by C.diphtheriae was reported in South Australia in 2014.
The greatest risk to Australians is from imported cases or to unimmunised travellers to endemic countries. Many Australians are now unimmunised.

The case fatality rate is high.
Now very rare in Western countries, diphtheria occurs in countries with poor immunisation programs.
In Eastern Europe in the 1990s, low immunisation rates coupled with economic crises triggered a major epidemic of diphtheria, which killed 30,000 people. By the time the epidemic was contained, the disease had spread to Finland, Germany and Norway.
Many Australian adults do not have diphtheria immunisation and, particularly if planning trips to the above mentioned areas, should ensure adequate immunisation.

Side effects
About 50% have discomfort or local inflammation following use of the triple vaccine in children; but there are fewer reactions with the acellular vaccines. About 30% have fever. Occasionally a small lump appears at the injection site – and usually disappears over several weeks. 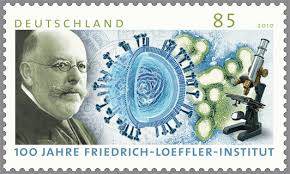 History
Edwin Klebs first identified the bacterium in 1883 and corynebacterium diphtheriae was cultivated for the first time by in 1884 by Friedrich Loeffler.

A history of events involving diphtheria, tetanus and pertussis immunisation is provided at the NCIRS site.

Diphtheria has not been seen in Victoria for about 25 years. In the past, it was a major scourge requiring considerable medical and nursing resources. This photograph, taken in 1934 – before the discovery of penicillin, is of the emergency diphtheria ward (ie a tent), showing nurses and patients in the Mooroopna Hospital.