Rabies is an acute viral encephalomyelitis of the central nervous system resulting from infection by the Rabies virus. Along with the Australian Bat Lyssavirus (ABL) – see below, the Rabies virus belongs to the genus Lyssavirus, family Rhabdovirus, and both produce a similar disease entity.

Transmission
Commonly, transmission of the Rabies virus occurs with a bite from an infected mammal, usually from a dog. Transmission may also occur following a scratch or contamination of a mucous membrane or abrasion by infected saliva. Bat bites may go unnoticed. 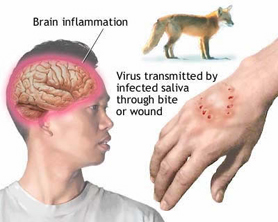 Transmission of the rabies virus

Features
Initially there is a non-specific fever, headache, malaise, anorexia, nausea and vomiting lasting one to four days. This is followed by excitation, delirium, confusion, hallucinations and convulsions; followed shortly by excessive salivation, difficulty in swallowing and death.
No tests are currently available to diagnose rabies infection in humans before the onset of clinical disease. Hence, diagnosis is based on clinical history, symptoms and signs, supported by epizootological information.
The initial symptoms of rabies are often mild fever and pain or paraesthesia at the wound site. As the virus spreads in the central nervous system, progressive encephalitis develops, characterized by hydrophobia or aerophobia, hyperactivity and fluctuating consciousness, generalized convulsions and, within a few days, cardiorespiratory arrest. Paralytic rabies, which may represent as much as 30% of the total number of human cases, runs a less dramatic, although still ultimately fatal, course. This form of rabies is often misdiagnosed and contributes to the underreporting of the disease.
Laboratory diagnosis
Immunofluorescent antibody staining of a skin biopsy from the nape of the neck or DNA detection by PCR in saliva, blood or CSF are the usual attempts at diagnosis.
Distribution
Rabies is endemic in most of Africa, Asia, the Americas and parts of Europe, the vector being a mammal – especially a dog, but also cats, bats, monkeys and others. ABL has been identified in all four species of Australian bats. 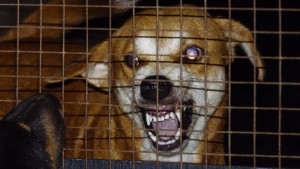 Any mammal may pass on the rabies virus

India
The eternal problem of rabies in India is said to have been magnified in recent years with the die-off of three species of vultures. Vultures, which would normally feed from the carcasses of cattle, have been poisoned by diclofenac fed to the cattle. Their niche in the food chain may have been filled by an increased population of feral dogs leading to an increase in bites and deaths.
North America
Rabies is endemic in the native mammals of North America. The bat rabies variant is found throughout continental USA, but skunks are particularly dangerous rabies transmitters because they have large amounts of virus in their saliva and are tenacious biters, inflicting traumatic wounds. Skunk rabies is concentrated in the central USA from Texas to Ontario, Canada and in the Central Valley of California.
Oceania
Two fatal cases (1996 and 1998) caused by ABL have been reported in Australia, but Australia, New Zealand and PNG are, at present, free of endemic rabies.

Surviving rabies
Only three people are known to have survived rabies. In 2005, a 15-year old girl in the US became the first recorded survivor of rabies, utilising what became known as the Milwaukee protocol. In November 2008, a 15-year-old boy from Recife, Brazil also survived after receiving similar treatment.

Travellers
The risk to travellers is generally low and is determined by the level of exposure to unvaccinated domestic animals. Some occupations (eg vets, spelunkers) and children are at greater risk. 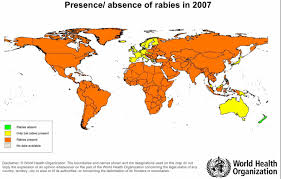 More than 55,000 deaths from rabies occur each year, mainly in Africa and the Indian Subcontinent (one person every 10 minutes) and S.E.Asia. The incidence of rabies is very high in China, especially in the southwestern and southern territories and in highly populated areas. The number of deaths from rabies has risen in China in recent years, with more than 3000 deaths reported in 2006.
Americas
Adventure travellers camping out or holidaying in wooded area (eg Amazon, East African safari tours) may be at greater risk.
Since 1990, 48 people have died from rabies in the United States. Every state has its own rabies law regarding the type of vaccination used and how often.

If you are vaccinated against rabies while overseas, GoodTrips strongly recommends that a certificate of vaccination be provided by the attending doctor, so that information may be provided to your own doctor on return.

First Aid
1. Be aware of the risk of rabies in the country you are visiting. Avoid contact with animals, especially encouraging children to not pat animals or to play with them. Do not eat food near monkeys. Take photographs only from a distance.

2. Vaccinate where appropriate.  (Discuss risk with your travel doctor.)
3. Remember that all bites, scratches and licks may facilitate the passage of the rabies virus and must be treated as threatening.
4. Wash all such contacts with running water for 5 minutes or more, using soap if available.
5. Transfer the patient to the nearest medical facility immediately. This may mean evacuation to another country.

More than 2.5 thousand million people live in regions where rabies is endemic. It is estimated that each year at least 50 000 people die from rabies, and more than 10 million receive post-exposure vaccination against this disease.

Among human infections, rabies is believed to be the tenth most common cause of death. 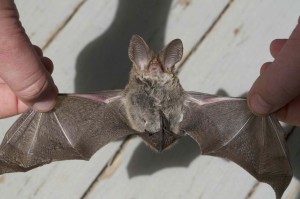 Australia is currently rabies-free, but two cases – both fatal – of Australian Bat Lyssavirus (ABL) have been reported (1996 and 1998). With an increasing human exposure to bat populations, ABL must be considered an emerging disease in this country. See NSW Govt warning. There are about 78 species of bats in Australia.
Similarly, the UK had been considered rabies-free over the past century until 1996, when the European Bat Lyssavirus 2 (EBL2) was discovered in a Daubentons bat.

Vaccine Information.
The first crude rabies vaccine was developed in 1885 by Louis Pasteur and colleagues. 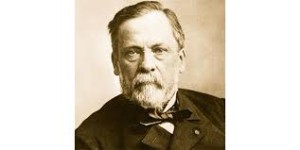 Since their development more than four decades ago, concentrated and purified cell-culture (CCV) and embryonated egg-based (EEV) rabies vaccines have proved to be safe and effective in preventing rabies.
Cell culture-based vaccines (CCVs) are inactivated after propagation in cell cultures (eg in human diploid fibroblasts, hamster kidney cells, Vero cells, etc.) The human diploid cell rabies vaccine was first introduced in 1967 and has been used on several million people, worldwide.
Rabipur, a vaccine from Novartis/CSL made from inactivated viruses in chick embryo culture (PCEC), was released for use in Australia in December 2005.  It should not be used in those with a true allergy to eggs. Over 55 million doses have been used world wide.
Merieux Inactivated rabies vaccine, a vaccine from Sanofi Pasteur, is a human diploid cell vaccine.
Three doses of either vaccine are usually given IM, but studies support the efficacy and safety of the intradermal route.
These vaccines are intended for pre-exposure prophylaxis as well as post-exposure prophylaxis, and have been administered to millions of people worldwide.

Nerve-tissue based vaccines (NTVs) have been around for over 100 years and have been continually developed. They are less potent and have a higher incidence of neurological reactions, but are still used in some Asian countries.
Fake rabies vaccines have been a problem in Luzon, Philippines, in recent years.

Administration
Pre-exposure
The rabies vaccine is given in three doses (days 0, 7 and 28) with boosters which may be given at twelve month intervals, or even longer, depending on antibody levels. It is recommended for long-term travellers to endemic areas and to Australian residents likely to receive bites from bats.
Since 1991, WHO has recommended the ID route of administration for rabies pre- and post-exposure prophylaxis. Studies have shown the effectiveness of ID rabies vaccination, even after a single dose
At Kialla Medical Clinic, studies in recent years have demonstrated the full effectiveness and lack of side-effects when using the intradermal route. However, successful ID vaccination is predicated on the competence of the vaccine administrator.

Post-exposure
Post-exposure treatment includes use of the rabies vaccine and the administration of rabies immunoglobulin (Imogam Rabies) together with local measures. The CDC Advisory Committee on Immunization Practices has recently recommended a reduced number of post-exposure vaccine doses from five to four (on days 0, 3, 7 and 14).

The indication for post-exposure prophylaxis with or without RIG depends on the type of contact with the suspected rabid animal:
Category I – touching or feeding animals, licks on the skin (i.e. no exposure);
Category II – nibbling of uncovered skin, minor scratches or abrasions without bleeding;
Category III – single or multiple transdermal bites or scratches, licks on broken skin, contamination of mucous membrane with saliva from licks, exposures to bats.
For category I exposures, no prophylaxis is required; whereas for category II, immediate vaccination, and for category III, immediate vaccination and administration of RIG are recommended.
For categories II and III, thorough (for ~15 minutes) washing and flushing with soap/detergent and copious amounts of water of all bite wounds and scratches should be done immediately, or as early as possible.

Precautions
Always inject to deltoid muscle (thigh in infants). Do not vaccinate in the presence of a fever or an infective illness.
Do not use in those with hypersensitivity to neomycin.
From ProMED:
Post-exposure rabies prophylaxis for unvaccinated persons should always include administration of both human rabies immune globulin (HRIG) and a series of 5 rabies vaccinations. The combination of immune globulin and vaccine is recommended for both bite and non-bite exposures, regardless of the time elapsed since the exposure. Previously immunized persons should receive only vaccine.
Human rabies immune globulin (HRIG) provides rapid passive immune protection. It is given only once, on the 1st day of the post-exposure prophylaxis regimen (designated day zero). As much as possible of the HRIG should be infiltrated into and around the wound, and the remaining given intramuscularly at a site distant from the vaccine. If the HRIG was not administered on day zero, it may be administered through the 7th day of the regimen. Beyond the 7th day, HRIG is not indicated since an antibody response to vaccine is presumed to have occurred. The recommended dosage of HRIG is 20 IU/kg body weight, for all ages. No more than the recommended dosage of HRIG should be given.
Rabies vaccine induces an active immune response that requires 7 to 10 days to develop and persists for 2 years or longer. The PEP vaccine series consists of 5 1-ml doses of rabies vaccine given on days 0, 3, 7, 14, and 28. The injection must be given intramuscularly in the deltoid region of adults or in the anterolateral thigh of young children. The 1st dose of rabies vaccine should be administered in conjunction with HRIG on day 0 of the PEP regimen, except in previously vaccinated individuals. Previously vaccinated persons are given 2 1.0 ml doses of vaccine IM, on days 0 and 3 (no HRIG is administered).

Booster injections
VNA titres of at least 0.5 IU/ml indicate protection. Where serological testing is unavailable, booster vaccination every 5 years may be an acceptable alternative.

Immune response
During infection, rabies viruses are mainly intraneuronal, and antigens may therefore be concealed from immune surveillance. An antibody response is not usually detected in infected humans before the second week of illness. Modern CCVs induce a prompt and high virus neutralizing antibody (VNA) response to the G protein. Cell-mediated immunity may also play a role in protection against infection.
With rabies vaccines, no randomized, controlled human trials and cohort studies involving untreated comparison groups are possible. Therefore, information on vaccine efficacy has been based on field experience of postexposure prophylaxis in humans exposed to laboratory-confirmed rabid dogs. An indirect assessment of vaccine efficacy can be made through immunogenicity studies comparing the VNA titres induced by the test vaccine with those induced in the same study by a reference vaccine of known protective efficacy. Furthermore, animal models serving as human surrogates have been used to demonstrate the utility of CCVs after experimental infection, as a proof of concept.
Although a protective VNA concentration cannot be established for humans, a minimum level of 0.5 IU/mL is used as a correlate of protection. In healthy vaccinees, this level should be achieved by day 14 of a post-exposure immunization regimen, with or without simultaneous administration of RIG and irrespective of age. – WHO