SARS (Severe acute respiratory syndrome) is a serious illness caused by a virus spread mainly by droplets, especially those generated during medical procedures. 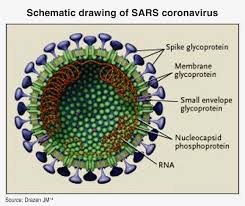 The virus responsible for SARS has been designated the SARS-CoV virus and is related to coronaviruses, those responsible for the common cold. It is a stable virus and may be found in urine and faeces after two days and on walls, glass, etc for several days, but loses its infectivity after exposure to disinfectants.
SARS-CoV can be efficiently grown in cell culture and rapidly spread from person to person. It can survive in faeces and urine at room temperature for >2 days and may cause serious, even fatal, disease.

The incubation period for the disease is between 2 and 7 days.

Infection is usually characterised by fever, chills, headache and muscle pain, which is followed a few days later by a dry non-productive cough and shortness of breath. 70% experience diarrhoea. As with all viral infections, some have no symptoms at all.
Death from progressive respiratory failure usually occurs in the second week of illness.

SARS first emerged in the Guangdong Province of China in November 2002, peaked in April 2003, killing nearly 1000 people and infecting over 8,000 in at least 25 countries. During 2004, outbreaks were very uncommon but still occurred sporadically. 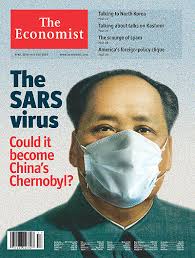 New viruses
A SARS-like virus, known as WIV1-CoV, is found in Chinese horseshoe bats (where SARS originated) and may be poised to infect humans without the need for adaptation.
“The capacity of this group of viruses to jump into humans is greater than we originally thought,” said Vineet Menachery, Ph.D., author of a new study. “While other adaptations may be required to produce an epidemic, several viral strains circulating in bat populations have already overcome the barrier of replication in human cells and suggest reemergence as a distinct possibility.”

Vaccine Information
SARS-CoV, a NAIDB Category C priority pathogen which could be used by bioterrorists as a biological weapon. Therefore, development of effective and safe vaccines is urgently needed to prevent a new SARS epidemic and for biodefense preparedness.
Currently, 3 major classes of SARS vaccines are under development:
1) inactivated SARS-CoV,
2) full-length S protein, and
3) those based on fragments containing neutralising epitopes.

An ideal SARS vaccine should
1) elicit highly potent neutralising antibody responses against a broad spectrum of viral strains;
2) induce protection against infection and transmission; and
3) be safe by not inducing any infection-enhancing antibodies or harmful immune or inflammatory responses.
Currently, an inactivated SARS-CoV vaccine is in clinical trials in China. Safety is the major concern for this type of vaccine.