The human immunodeficiency virus (HIV) is a known carcinogen.
One person, somewhere in the world, is infected with HIV every 6.4 seconds.

HIV is an RNA virus classified as a lentivirus, within the retrovirus family. However, lentiviruses have a more complex genetic structure than do other retroviruses and produce progressive wasting disorders, neurodegeneration and death.

In Western society, those affected are predominantly homosexual men, whereas in Third World countries, heterosexual transmission is the norm.

Features
50% of infected people will experience a fever with aching muscles and sore throat in the first 2-6 weeks after infection but then become asymptomatic. However, testing for HIV antibodies may not be positive for up to 12 weeks. The median period of time between infection with HIV and the onset of clinically apparent disease is approximately 10 years in western countries, however a small proportion develop AIDS and die within a few months, while some 5% of infected people show no sign of disease after 12 years.

Background
HIV, the infectious agent of AIDS, is thought to have originated in non-human primates in sub-Saharan Africa and transferred to humans during the 20th century. The epidemic officially began on 5 June 1981. HIV infection in humans is now pandemic, the highest incidence being in southern and eastern Africa. Around the world, about 44 million people are living with HIV/AIDS. There were over three million deaths in 2003.

Pathology
HIV infects the cells of the immune system, including T lymphocytes and macrophages, in a manner similar to lentiviruses affecting some animals. The so-called T-helper cells, which coordinate a number of immunological functions, are the primary targets of HIV. AIDS, the clinical manifestation of HIV-induced disease might present as Kaposi’s sarcoma or other unusual tumours or infections, but is characterised by a progressive and persisting deficiency in CD4+ T cells. Estimates of the CD4+ levels are useful predictors of outcome.

Travellers
Travellers are advised of the high incidence of HIV/AIDS in populations of many countries in Africa and Asia, especially among people working in the sex industry. Appropriate precautions or total avoidance of casual contact are strongly urged. 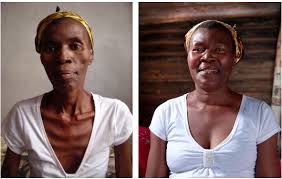 Some countries prohibit the importation of antiretroviral drugs and travellers are advised to check the Smartraveller web site.
The Global AIDS Program is accessible at the CDC site.

HIV/AIDS and other infections
Tuberculosis (TB) – an airborne disease – is the leading cause of death among people who are HIV-positive. Approximately one-third of the nearly 40 million people living with HIV/AIDS are also infected with TB. In areas such as sub-Saharan Africa, up to half of AIDS-related deaths are caused by TB. Of those people living with HIV/AIDS with latent TB infection, approximately 10 percent per year develop active TB. It is vital to treat people with TB to prevent illness and death, as well as to prevent the spread of TB to others.
Cowpox (catpox) – this zoonotic poxvirus has been reported in Europe and represents a theoretical threat to the immunocompromised, such as those with HIV/AIDS.

Infected medical and nursing personnel
Transmission of HIV from a health-care worker to patients is extremely rare.
In the early 1990s, CDC reported on six patients infected by a Florida dentist. Subsequently, only three additional cases have been reported.

Vaccine Information
Despite 20 years of research, there are currently no vaccines available for the prevention or treatment of HIV/AIDS, however about 30 are undergoing trials in several countries. The Bill and Melinda Gates Foundation has awarded 16 teams of researchers in 19 countries a total of $287 million to facilitate cooperation in efforts to find a vaccine against HIV (additional to efforts to combat malaria and TB). The mission of the WHO-UNAIDS HIV Vaccine Initiative (HVI) is to promote the development, facilitate evaluation, and address future availability of preventive HIV vaccines, with a focus on the need of developing countries.

Recommendations for post-exposure interventions to prevent infection have been prepared by CDC (2008).

Treatment
Prevention of infection, especially in the workplace, is the most important treatment option.
The treatment of established HIV infection and AIDS is currently restricted to the selective use of anti-viral agents, usually in combination. Being a retroviral, HIV is usually treated with a combination of retroviral drugs, from classes such as transcriptase inhibitors, protease inhibitors and integrase inhibitors. Most patients with HIV need to take antiretroviral drugs each day to stop the virus replicating and causing damage to  their immune system. This expensive and the virus emerges from lymphoid tissues and gut cells once treatment stops.
The goal is to enhance immunity and delay or prevent advancement to symptomatic disease without inducing important side effects. Unfortunately, side effects and drug resistance by HIV, are common problems with treatment. Antiretroviral regimens predictably fail in a proportion of patients. There is therefore a continuing research effort to discover, develop and deliver new antiretroviral drugs.

Researchers at the IrsiCaixa AIDS Research Institute in Barcelona have commenced trials with two new vaccines developed in Oxford, and have demonstrated total clearing of the virus in a small group of patients without the need for daily antiretroviral drugs.
A new class of antiretroviral drugs are the fusion inhibitors, the first being enfuvirtide, which disrupt the fusion reaction between virus and host cell.
A major therapeutic goal is to prevent opportunistic infection by other organisms.

Retrovirals are used in occupational or non-occupational exposure to HIV infection. Postexposure prophylaxis (PEP) treatment is available and has proven benefits if taken immediately.

Circumcision
Large studies in South Africa, Kenya and Uganda have demonstrated a >50% reduction in take up rates of HIV in men who have been circumcised. This benefit is not enjoyed by their partners. Lancet 24.2.07.
A recent review on the subject may be found at The Cochrane Library.

Keratinisation of the male foreskin through the topical application of oestrogen cream is also protective.