Rotaviral gastroenteritis is caused by the Rotavirus, one of nine genera in the family Reoviridae.
Rotaviruses have been classified into five groups (A-E) and 42 unique strains, each infecting the villi of the small intestine. They cause the major portion of diarrhoeal illness in infants and children (not adults) throughout the world. 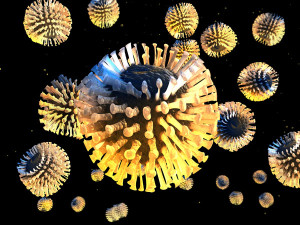 In Australia, serotype G1 accounts for 40.25% of strains, G4 22.6%, G9 15.1% and G3 14.7% of strains. Throughout the world, the dominant group is A, although group B has been implicated in some large outbreaks, especially in China.
The reservoir is human and spread is mainly by the faecal-oral route.

Features
Children infected with Rotavirus develop watery diarrhoea, fever, abdominal pain, vomiting and dehydration. The loss of fluid and electrolytes may be fatal.
Children surviving the first infection usually do not experience a second episode, but some have several infections.

Rotavirus deaths in children <5 around the world

Background
Rotavirus was first identified as a cause of human disease in 1973 at the Royal Childrens Hospital, Melbourne. When viewed under the electron microscope it has a wheel-like appearance; hence the name rota, being Latin for wheel.
Rotavirus is the leading cause of childhood diarrhoea around the world, infecting virtually all children between three months and five years of age.
Australia
In Australia, 20-40% of all admissions of young children with diarrhoea – particularly in late Autumn and Winter – are due to rotavirus infection. 10,000 hospitalisations (3.75% of all children) with one death, costing more than A$30 million occur each year in Australia of children under five. Indigenous children are hospitalised at a rate 3-5 times more often than others.
All people are susceptible, but adults usually have only a mild disease.
International
Estimates of infection worldwide range between 3 and 5 billion/year in children under the age of five, of whom at least 600,000 will die each year.
The greatest loss of life occurs in India, Pakistan, China and Nigeria. Poor nutrition, a recent attack of measles or the coexistence of immunodeficiency are factors increasing the chance of severe disease or death in third world countries.
Rotavirus diarrhoea does not constitute a major threat to most travellers.

Vaccine Information.
History
The first vaccine (derived from a bovine rotavirus) was trialled in Finland in 1983 and appeared to be successful; however, the same vaccine trialled in Africa and Peru was much less so and was withdrawn.
An oral live-attenuated vaccine (RotaShield) was licensed in 1998, but was withdrawn the following year, because of the high incidence (1 in 2500) of intussusception.

Two new live attenuated oral vaccines are now available in Australia as part of the National Immunisation Program. Both are given orally.
Rotarix (GSK) is a live attenuated strain of human rotavirus and RotaTeq (Merck/CSL) is a pentavalent bovine-human re-assortment vaccine.
Both vaccines have been found to be efficacious and both provide between 85 and 98% protection against severe rotavirus diarrhoea.
Rotarix is administered in two doses, two months apart, at 2 and 4 months. RotaTeq is administered in three doses at 2, 4 and 6 months with a minimum interval between doses of 4 weeks.
Immunisation of older infants or children is not recommended.

Both vaccines are now available free of charge as part of the National Immunisation Program for babies born after May 1st 2007.

In March, 2010, GSK reported to the FDA that an independent academic research team using a novel technique to look for viruses had discovered DNA components from porcine circovirus type 1 (PCV1) in Rotarix vaccine. GSK conducted additional studies and confirmed that DNA from PCV1 is present in the finished Rotarix vaccine (as well as in the cell bank and seed from which the vaccine is derived) and that it has been present since the early stages of the vaccine’s development. FDA decided to suspend the vaccine’s use while learning more about the situation and until further studies are done. PCV1 is not known to cause disease in people or animals.
PCV1 was not found in RotaTeq rotavirus vaccine (RV5; Merck).
Use of Rotarix vaccine has been suspended in the US, but not in Australia.

Information for doctors is available at the NCIRS site.

Treatment
Fluid replacement – orally by Oral Rehydration Solution or ORS – is the usual treatment and should be started as soon as possible. Children who are unwell with fever, disinterest, drowsiness, etc may need hospitalisation and IV fluids.