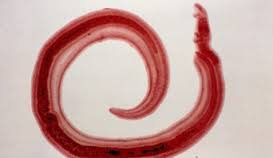 The disease called schistosomiasis (or ‘bilharzia’) is caused by infection with parasites of the Schistoma family (S.mansoni, S.haematobium, S.japonicum, S.mekongi and S.intercalatum – the first two being the most common).
The major species are distinguished by their snail vectors, location within the host and by their egg morphology.

Presentation
Early infections may be asymptomatic, but a few report a maculopapular rash or tingling at the site of cercarial penetration. Others develop Katayama Fever (fevers, chills, muscle pains, eosinophilia) within 1-2 months. Neurological complications (paraplegia, seizures, confusion, coma and transverse myelitis) may occur after 4-8 weeks, without many other symptoms. Chronic complications include portal hypertension, cor pulmonale, intestinal polyps or obstruction, hepatosplenomegaly, fibrosis of bladder and ureters (with haematuria and bladder cancer) and pain with ejaculation.

Transmission
Transmission occurs through intact skin in waters infested with freshwater snails. Parasites leave the snail as cercariae (the free-swimming larval stage of a trematode parasite), penetrate the skin and migrate to the veins around the liver and bladder of the host, where mature worm pairs begin to produce eggs after an incubation period of 1-3 months. Worms may live up to 15 years and the eggs are shed in the urine or faeces.
Risk factors
Risk is highest along the margins of lakes and dams, slow-moving streams and rivers, but may occur far from the shores and after only a few minutes exposure. About 10% of swimmers will be infected. 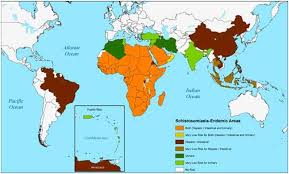 Diagnosis
1. Serology (the most sensitive test for infection) takes three months to become positive. A reliable ELISA test is available for schistosomiasis.
2. Two specimens of terminal urine samples (collected between 10.00am and 2.00pm) should be examined for eggs.
3. Two specimens of stools should be examined for eggs.
4. An FBE will show an eosinophilia.

Screening
Screening should be offered to travellers who have had more than 15 minutes of surface freshwater contact in an endemic area. This should take place at least 12 weeks after last possible exposure, to avoid early false negatives.Schistosomiasis is second only to malaria as a parasitic cause of morbidity and mortality and is found in 74 developing countries in Africa, the Middle East, Latin America and parts of Asia.
Helminth infections (such as schistosomiasis) impose a huge burden on poor populations in the developing world and strategies for the coordinated use of antihelminthic drugs have been devised by WHO.
Travellers
Travellers should avoid swimming or wading while in endemic countries.

Vaccine Information
No vaccines exist for the prevention of schistosomiasis, although several avenues have been explored in Egypt and in Brazil.

Prevention
Travellers should avoid swimming or wading in endemic countries. Swimming in chlorinated pools or the sea is safe.
Swim only for short periods and in moving water.
Avoid swimming early or late in the day.
Rub skin vigorously with a towel after leaving the water. 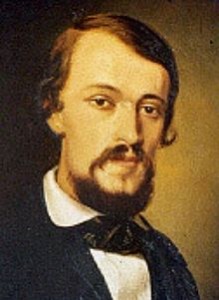 History
Schistosomiasis is known as bilharzia in many countries, after German physician Theodor Bilharz, who first described the cause of urinary schistosomiasis in 1851.

The first physician who described the entire disease cycle was Brazilian parasitologist Pirajá da Silva in 1908.