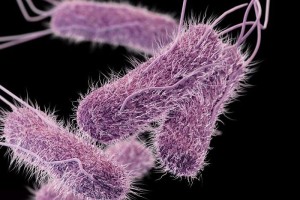 Typhoid is a serious infection of the gut caused by Salmonella typhi bacteria usually acquired from the consumption of contaminated food or water.
It is a rare infection in Australia and uncommon in Australians travelling abroad. 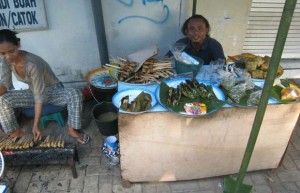 Incidence
Typhoid fever is a serious public health problem in many developing countries, predominantly affecting children (5-15 years). There are typically fewer than 150 cases of typhoid fever reported in Australia each year, with most following travel to regions with endemic disease.

International
According to the World Health Organization (WHO), there are 16 million to 33 million cases and 500,000 to 600,000 deaths from typhoid fever annually. One study estimated that 22 million cases and 216,000 related deaths occurred in 2000. 90% are estimated to occur in Asia. 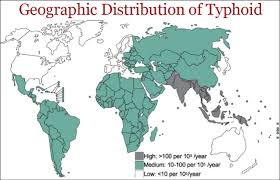 Typhoid is an endemic illness in many third world countries (especially in the Indian Subcontinent, in S.E.Asia and much of Central and South America) and its incidence is under reported. It occurs mainly in rural areas with poor water and sanitation systems.
Drug resistance is becoming a great problem and in a patient returning from India S. typhi (see below) resistance to quinolones has to be presumed

Drug resistance to S.typhi is becoming more common and vaccination, especially for travellers to the Indian Subcontinent, is recommended even for short visits. Strains resistant to all three first-line antibiotics (ampicillin, chloramphenicol, and trimethoprim–sulfamethoxazole) accounted for 65% of isolates tested in Karachi.
Only China and Vietnam have incorporated typhoid vaccination into their routine immunisation programs.

Australia
Less than 85 cases are notified in Australia each year, but typhoid is a frequent risk to Australians travelling to Third World countries. Those with decreased gastric acid are at increased risk.

Enteric fever
Enteric fever is a septicaemic syndrome characterised by a progressively rising fever, malaise, headache, abdominal pain and ‘rose spots’, relative bradycardia, splenomegaly and leucopenia. Diarrhoea is uncommon and occurs late in the illness.
Typical enteric fever is typically caused by S.typhii, but in some studies, a majority of cases are caused by S.paratyphi A. However, enterocolitis may be caused by any of the 1400 group 1 serotypes of Salmonellae.

Vaccine Information
The two vaccines commonly used in Australia are:
– an oral live-attenuated-bacteria vaccine, Vivotif Oral, taken in 3 (or 4) doses, and
– an injectable purified Vi polysaccharides of the S.Typhi strain Ty2 (Typherix, Typhim Vi) each given as a single 0.5ml IM injection.
Both vaccines are very safe (serious side effects occur in 1.4/100,000 vaccines given) and provide immunity for at least three years. Indicated in those >2 years. Boosters recommended after three years.

Vivotif Oral (CSL), given in a course of 3 or 4 doses, has replaced Typh-Vax which has been unavailable in recent years. It should not be taken with antibiotics and should be taken well before any antimalarials.
Injectable typhoid vaccine is also available in combination with hepatitis A vaccine (Vivaxim).

The use of typhoid vaccines, especially in large-scale immunisation programs, is discussed in a WHO position paper. They do not protect against paratyphoid fever.

The Future
Scientists have found a variant of a gene that confers a near five-fold protection against typhoid fever, which kills millions of people each year. New vaccines coming??? 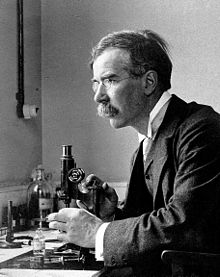 History
Typhoid fever is thought to have contributed to epidemics of massive loss of live since ancient Greece. Sometimes described as dysentery, especially during times of war, typhoid has been blamed for thousands of deaths in the American Civil War and the Spanish-American War. The first vaccine was developed by Almroth Edward Wright in 1896 and used to protect British troops in the Boer War.

The chlorination of water supplies was introduced in 1908 and antibiotics were first used to treat typhoid in 1942.