GoodTrips would not routinely recommend anthrax vaccination for any traveller.

Anthrax is an infection, usually acquired via the skin or – rarely – through the gut or by inhaled particles, of the spore-forming bacterium, Bacillus anthracis, of which there are 89 known strains. 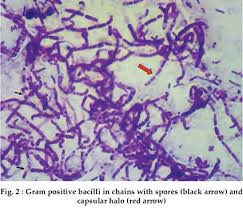 Anthrax is primarily a disease of herbivores (cattle, horses, sheep, goats) and humans become infected incidentally through contact with infected animals.
The anthrax spores in soil are very tough and can live many decades, perhaps centuries, and are known to occur on all continents except Antarctica.

Although very rare in Australia (there are about 0.08 notifications per 100,000 population per year) cutaneous anthrax is an occupational hazard for handlers of hides, wool, infected wildlife, etc.

The commonest form of anthrax is cutaneous anthrax (>95% of all cases globally), in which a painless skin lesion classically forms a black malignant pustule after 2-6 days and may progress to septicaemia. Untreated cutaneous cases have a fatality rate of 5-20%.
Untreated pulmonary anthrax has a fatality rate approaching 100%, while 25-70% of untreated gastrointestinal anthrax patients die. 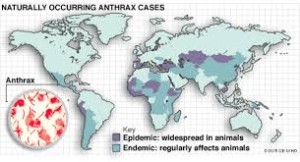 Anthrax is found in most countries, but most commonly in South-East Asia, Africa and the Middle East. Soil is contaminated with spores from the carcasses of dead animals and may remain viable for decades. Grazing animals become infected via injured mucous membranes
Anthrax occurs in Australia in a well-defined belt in northern Victoria and New South Wales. Climatic conditions occasionally arise which may lead to infection in animals (eg in February 2015 in Tatura) or in humans working with animals.

The US Department of Defence (DoD) regularly ships inactivated biological materials for research,
development, testing, and evaluation to industry, academia, and other Federal laboratories. On 22 May 2015, a private company notified the CDC that inactivated Bacillus anthracis (BA) spores in its possession were live. This constitutes a threat the potential to pose a threat to human health and it is only distributed to facilities regulated by the Federal Select Agent Program.

The CDC began an investigation and determined that a BA sample originating from DPG on 20 Apr 2015, was not fully inactivated and contained viable BA spores. We now know that, over the course of the
last decade, 86 facilities in the United States and 7 other countries (including Australia)
have received low concentrations of live BA spore samples from the Dugway Proving Ground (DPG) in Utah thought to be completely inactivated. The low numbers of live spores found in inactivated DoD samples did not pose a risk to the general public. Nonetheless, the shipment of live BA samples outside of the
select agent program restrictions (at any concentration) is a serious breach of regulations.

The US Department of Defence has created a website that summarises current information pertaining to the BA situation. 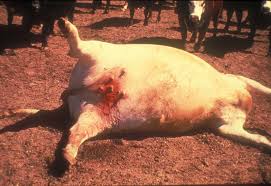 There are three vaccines, all varieties of a live avirulent strain of Bacillus anthracis called the Sterne strain, for veterinary use. None are registered for human use in Australia.
Anthrax Vaccine Adsorbed (BioThrax) has been used by the US military and involves six doses, three given two weeks apart followed by three additional injections given at 6, 12, and 18 months, after the first dose. An annual booster is required to maintain ongoing immunity.

Based on limited but convincing evidence, the vaccine protects against both cutaneous (skin) and inhalational anthrax.

A brief review (html file) on the safety of the anthrax vaccine is provided at the NCIRS site.
The WHO publication Anthrax in humans and animals 4th Ed is available in pdf format.

For more information please visit the web site below:
http://www.health.vic.gov.au/ideas/bluebook/anthrax.htm