The chickenpox virus (the varicella-zoster virus – VZV) is highly infectious and thought to be spread by nasal droplets from person to person. It is one of eight herpes viruses causing infections in humans. It is a double-stranded DNA virus and is most closely related to herpes simplex virus types 1 and 2, having the unusual ability to establish a latent infection in nerve ganglions and later reactivate.

The incubation period is about 2 weeks before the itchy blister-like rash appears. 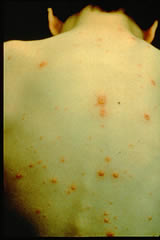 The vesicles of chickenpox.

Features
A low grade fever and malaise may precede the characteristic vesicular rash, which might appear as isolated lesions or in crops affecting the face, scalp, trunk and mucous membranes. Occasionally a few spots are misdiagnosed as insect bites. 5% of cases are subclinical.

After 3-4 days, the spots start to dry out and are no longer infectious once crusting occurs.

Complications
Secondary infection by bacteria are common consequences and can lead to much illness such as toxic shock. Aseptic meningitis and pneumonia sometimes occurs. The immunocompromised and the elderly are most at risk.

Congenital varicella syndrome occurs when the pregnant woman is infected in the first 20 weeks. Severe disease occurs in the newborn when mothers are infected a few days before or after delivery.
Reactivation of the virus at a later date produces a localised and painful rash known as shingles. Mild cases of chickenpox are often misdiagnosed.
Exclude from school for at least 5 days from appearance of first eruption or until fully recovered. In Victoria, chickenpox is not a notifiable infection. 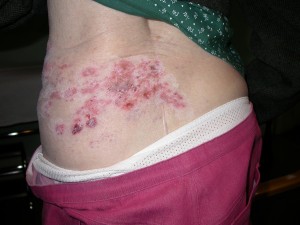 Shingles
The VZV can cause shingles in some people who have had chickenpox. Following an attack of chickenpox, the virus becomes latent (lies dormant) in nerve cells in the body. The dormant virus may reactivate and give rise to an attack of shingles later in life.

People who have never had chickenpox illness or been immunised against chickenpox can get chickenpox (not shingles) if they come into contact with the fluid in the blisters of a person with shingles.

The chickenpox vaccine (Varilrix, Varivax) is a live attenuated virus given in one dose to children, and in two doses (1-2 months apart) to adults and adolescents over 13 years. The vaccine is recommended to all non-immune adults and children over 12 months. It is probably more effective if given after the age of 15 months.
It may be given simultaneously with other live vaccines (eg Priorix or Yellow fever) or separated by a period of 4 weeks.

Side effects
20% of recipients will experience a local reaction and 1-6% will have a fever or a mild blistered rash. These vaccines prevent 85% of all cases and 97% of severe cases of chickenpox.

The chickenpox (varicella) vaccine is included on the National Vaccine Schedule, detailed on the Dept of Health and Ageing web site.
At-risk teenagers aged 10-13 years (year 7 students) who have not previously received the vaccine or who have not had the disease are now offered the vaccine as part of the School Immunisation Program.

After some 15 years of development, a quadrivalent vaccine – MMRV containing live attenuated viruses which protects against measles, mumps, rubella and varicella was approved by the FDA in the US and by the TGA in Australia in 2005/6. The safety and efficacy of each quadrivalent vaccine is similar to the individual vaccines given together.
Two brands are available – ProQuad from Merck/CSL and Priorix-Tetra from GSK.
They are given in two doses, at least 1 month apart.

Information for doctors is available at the NCIRS site.

History of varicella vaccination in Australia.

Shingles vaccination
The vaccine, in a more concentrated form (25,000 vial units cf 1300) Zostavax, is also very effective in reducing the pain and other complications of shingles in people aged >50 years. It was approved by the TGA in may 2007 and is now approved for inclusion on the National Immunisation Program from Nov 2016.  The retail price exceeds $200.

A single dose of live attenuated herpes zoster vaccine is recommended for all adults 60 years and older to prevent shingles and postherpetic neuralgia. Since November 2016, the vaccine has been included in the NIP for all adults at 70 years of age, with a catch-up program for those aged 71 to 79 years until October 2021. People aged 70 years and older have a higher risk of disease than younger people and on balance vaccination in the age group 70 to 79 years is the most cost-effective in terms of population-level use of the vaccine. The zoster vaccine is, however, contraindicated in people who are immunosuppressed due to either a medical condition (including leukaemia, lymphoma and untreated HIV infection) or medical treatment (including but not limited to most biological immunosuppressives and immunomodulators, with the exception of certain short-term or low-dose corticosteroids and other drugs, as listed in the Handbook).
The zoster vaccine is formulated from the same varicella–zoster virus strain as the childhood varicella (chickenpox) vaccine but is of higher potency, containing approximately 14 times the concentration of live attenuated virus. Guidance for its use is available both in the Handbook and the NCIRS online fact sheet ‘Zoster vaccine for Australian adults’.  Medicine Today 2017 p.25-33