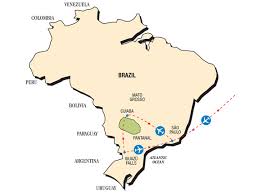 My wife–Carolyn–and I like to watch birds. We’re not what you’d call hard-core birders, but almost always bring our binoculars and a field guide with us when we travel, and from time to time we’ll sign up for a trip organized by one of the specialized birding tour companies. Our first such trip was in 1996 with an outfit called Field Guides, which took us over about a three week period to several areas in Brazil, most notably the Pantanal, an immense, seasonally swampy area near the border with Bolivia and Paraguay.

In addition to seeing over three hundred species of birds, including the spectacular hyacinth macaw (plus caimans (South American alligators), capybaras (the world’s biggest rodents), maned wolves and a giant anteater), we learned some tropical birding tour basics: to wit, you 1) get up every day at about 4:45 a.m.; 2) douse yourselves with DEET-based insect repellant before hitting the trail; 3) tuck your pants into your socks and spray the joins with repellant; 4) wear a hat with a brim; 5) use sun-block; 6) drink plenty of water; 7) bring low quality binoculars only at the risk of drawing scorn and missing birds; 8) wear a nice red shirt only if you’re willing to risk arousing the ire of certain of your fellow birders until the sniffy know-it-alls discover it’s a total hummingbird magnet; and 9) take appropriate pre-trip anti-microorganism precautions. On this last point, thanks to the advice and ministrations of the Fairfax County Health Department, we arrived in Brazil freshly vaccinated against typhoid, hepatitis A, tetanus and meningococcal meningitis, and, in my case, mumps (thanks to a slick-talking nurse with a German accent who terrified me with a too-graphic tale of the suffering endured by her two ex-husbands when they contracted the disease), and bearing assorted pills to deploy against gastrointestinal evils and malaria.

In subsequent years, we took birding company tours to Venezuela, Panama, Mexico, Honduras, Iceland, Canada, Egypt and France. None of these was as long or as challenging as the Brazil trip, although the Panama adventure did offer one the chance to freeze in the mountain mornings at 7,000 feet as well as swelter along the Canal at sea level, plus the opportunity get up a couple of mornings at 3:30 a.m. It also introduced us to red-alert anti-chigger precautions, those vicious critters apparently having a special affinity for Panama. Basically, in addition to the usual applications of DEET-based repellant, we were told to dust the trouser-sock join area with sulfur powder (thoughtfully supplied by Victor Emmanuel Nature Tours, our tour company). It seemed to work. 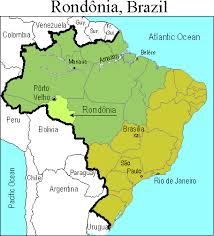 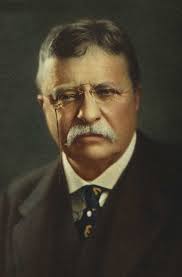 Last year, after listening for most of a decade to my whining about how I’d like to do another birding tour to Brazil, Carolyn finally gave in and we signed up for a June 2015 trip with Field Guides to the remote Brazilian state of Rondonia. The trip would start with a few days’ birding in the vicinity of Porto Velho, Rondonia’s capital, and culminate with a six night stay at the Pousada Rio Roosevelt, a fishing lodge situated on the Rio Roosevelt and surrounded by an immense expanse of pristine tropical forest. The river is named after Theodore Roosevelt, who was President of the US from 1901 to1909. In 1913-14, to occupy himself after losing the 1912 US Presidential election, TR led an almost disastrous exploratory expedition down the river, then unmapped and ominously known as the Rio da Duvida, the River of Doubt. Teddy was an excellent President, but it seems he was a duffus as an expedition organizer. A few years ago, Candice Millard wrote a very interesting book–The River of Doubt: Theodore Roosevelt’s Darkest Journey–about the expedition.

Thanks to various relatively recent jaunts to the tropics, Carolyn and I were up to date on our inoculations but did have to take along anti-malaria pills and some cipro and Imodium to combat intestinal nastiness. For insect repellant, we bought a lotion with 25% DEET and a spray of the same strength. Carolyn had developed nervousness about DEET and was intrigued with some of the DEET-less concoctions on the market but I didn’t want to take a chance with that approach. Carolyn decided our hats were inadequately brimmed, so we made the rounds of the local outdoor stores until we found suitable chapeaus.

On the appointed day, May 30, we headed to Washington’s Reagan National Airport where we caught an American Airlines flight to Miami and a connecting flight on American to Brasilia, Brazil’s capital. After the sort of restful night you expect on an airplane, we staggered out of the plane at around 8:30 a.m., cleared customs and immigration and met the fellow, Roberto Torres, who we’d hired to give us a city tour. He drove us around for about five hours and gave us a splendid look at, and education about, this planned city’s impressive architecture, much of which was designed by the renowned Oscar Niemeyer.

The next morning, we took a 2.5-hour flight to the northwest on a TAM Airbus to Porto Velho,a sizeable city on the Rio Madeira, an impressively large tributary of the Amazon. There we rendezvoused with our Field Guides group at our hotel and not long after headed down to the river, where we did a little birding, admired some river dolphins, both the pink and gray varieties, and took an evening boat ride under the full, tropical moon. 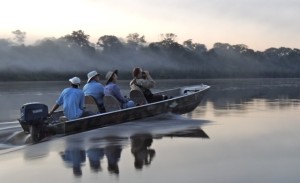 Birding in the Porto Velho region was quite good, despite the fact that the area’s forests have been reduced considerably by agriculture. The premier sighting for this segment of the trip was the black bushbird. The bird is so rarely spotted that sighting one had our guide practically dancing with excitement. Everyone in the group had a good look at the critter–except me, who completely missed it. Let me tell you, being the one person on a bird tour to fail to spot a Big Deal Bird is a humiliation. Carolyn tried to console me by whispering that it more or less looked like a European starling, but that was little comfort. For me, the plod back to the van afterward was pretty much a walk of shame. 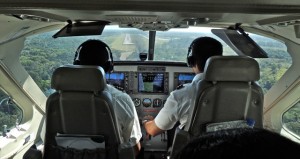 For all that we’d seen a lot of good birds in the Porto Velho area, everyone in the group was delighted when the morning arrived for us to board our chartered Cessna and fly off to the Pousada Rio Roosevelt. 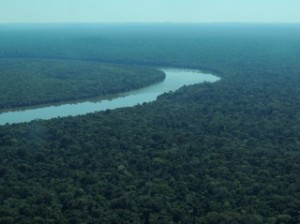 The 1.5 hour flight to the Pousada’s dirt airstrip gave us dramatic confirmation that we’d be spending our time in true wilderness: for the last 30-40 minutes, we passed over nothing but mile after mile after mile of unbroken tropical forest.

The lodge fronted on the Rio Roosevelt adjacent to a pretty, white sand beach just downstream from a small but impressive cataract. The river was many hundreds of feet wide. As advertised, our accommodations were quite comfortable–the six guest bungalows were roomy and had electricity, AC, hot water, and refrigerators well provided with bottled water, soft drinks and beer. Additionally, rooms were serviced daily and the lodge boasted daily laundry service. 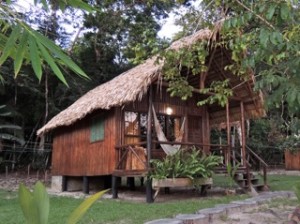 The dining hall offered a very good buffet and had a well-stocked bar. We enjoyed a couple of caipirinhas every evening. Befitting a fishing lodge, its walls were covered with photos of fishermen with their catches–the fish were almost always quite large, sometimes huge, often oddly shaped, and frequently alarmingly toothy. 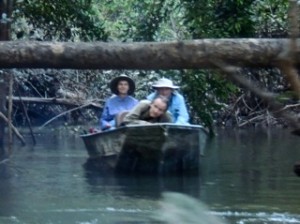 Our daily drill was simple. Breakfast was at 5:30 a.m., and at 6:00 a.m. we’d take boats either upriver or downriver. To get to the upriver boats, which were moored above the cataract, we had to walk several hundred yards along the portage trail originally cut by the TR expedition and kept open over the years by rubber tappers. Once in the boats, we’d motor along the wide, swift river for twenty to forty minutes–occasionally pausing to check out birds or other wildlife–until we reached a trail (invariably created by rubber tappers) known by our guide to be to be notably birdy, where we’d disembark and traipse into the forest to get down to the business of bird watching. We’d head back to the lodge for lunch at about 12:30 p.m. and get back on the river around 3:00 p.m., returning to the lodge in time for a shower and our 7:00 p.m. dinner, after which the group would go over the daily bird list. 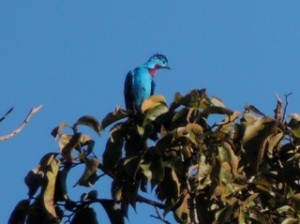 Predictably, the birding was superb–on the Rio Roosevelt leg, we saw about 140 species of the 212 total for the trip–although I think our guide felt our experience fell a bit short of the mark, as he never found us an ant swarm. Ant swarms–which we’d encountered in Panama–are absolute magnets for a wide variety of species and, in particular, offer a chance to see birds that tend to skulk out of sight. The absolute highlight of the whole trip was a harpy eagle sighting. Harpies are the biggest eagles in the Americas and have a very striking appearance; with a distinctive crest and legs so feathery they appear to be pantaloons. They’re fairly elusive–one woman in our group had been looking for one on numerous trips to South America over a thirty-year period. Our harpy was perched in full view on a limb of a Brazil nut tree, calling loudly, presumably at a lady eagle. He had his partially eaten lunch–a monkey–under one talon. After about fifteen minutes, he flew off, still calling lustily and, no doubt, lustfully. Another notable sighting along the Rio Roosevelt was a Chico’s tyrannulet, which is more or less in the same rarity league as the black bushbird, but somewhat cuter, looking sort of like a greenish sparrow. 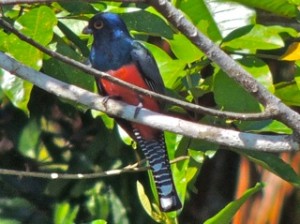 The wonderful birding came at quite a price in bug bites. Carolyn had decided on the flight down from the US that she was too uneasy about DEET to use any repellant. This had no consequences

in the Porto Velho segment of the tour, which basically just involved roadside birding. Emboldened by Carolyn’s experience, neither of us used any insecticide for our first full day of Rio Roosevelt birding. We didn’t even tuck our pants into our socks. Big mistake. When the day was over, we were just covered with bites–faces, arms, hands, torsos, and legs. These generally were stealth bites–we had no idea we were under such assault. We also discovered some ticks and took great care thereafter to do a rigorous pre-shower tick check, with no bodily locale exempted from spousal scrutiny. On the days that followed, I made liberal use of repellant and made sure to tuck my pants into my socks, and saw a gratifying decline in my bite count, except on my hands, which the local no-see-ums, utterly unimpressed by repellant, seemed to find extra tasty. I took to wearing sun gloves to fend off these nasties, but that only made the bites itchier. Carolyn, a woman of strong convictions, bloused her trousers and used her sun gloves, but continued to spurn repellant and continued to accumulate bites.

In addition to being very buggy, the birding was hot and humid. Daytime temperatures reached 90 degrees Fahrenheit or thereabouts and the humidity on the forest trails was stunning. Sweat just rolled down everyone. Fortunately, our boatmen followed us through the woods with coolers of bottled water. Sensibly, we guzzled it. 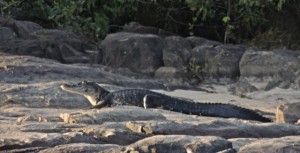 No jaguars or tapirs, alas. The only people we saw were the folks on the tour, the lodge’s staffers, and the pilots for our chartered Cessna.

In all, while the Rio Roosevelt portion of our visit to Rondonia was far from restful, it was one of the most interesting trips we’ve ever made. The tropical forests of the Brazilian Amazon are vanishing at an all too rapid rate, as we observed around Porto Velho, and it was wonderful to have the opportunity to experience first hand, in comfortable circumstances, the wilderness of the River of Doubt.